There are very few remakes that can surpass the original. I found that to be the case way back in 2009 when I noticed so many films were announced to be remade. Most of them were trash, only some truly captured the magic of the original. Remakes, when they are done right can live up to the original. When I think back on it films like John Carpenter's remake of 'The Thing from Another World' (aka "The Thing") it was not really a remake. It was a loosely based sequel disguised as a remake. The remake of The Crazies was AS GOOD as the original (IMO) some may say it surpassed the original. For me the original is still better because the infected in that film looked just like us. We couldn’t tell they were infected. In the remake most of the time it is very visibly obvious who the infected are. It continues to play with us that one of our main characters is infected or might be. It tries to string us along in this theory even though we have seen what the other infected look like. Therefore, for me it doesn’t surpass the original. Dawn of the Dead remake was good but didn’t surpass the original because it lacked one major element for me and that was the theme of the original story. Our original story was a social commentary of consumerism. Even in the apocalypse our characters decide to take refuge in an abandoned mall. They take in all the luxuries they couldn’t afford in the real world and now, they can. The movie was good other than that but without the main theme; them fighting to keep the mall because they believe it belongs to them as oppose to them leaving because they have to save a dog! It just lacked for me. It was still a good movie and an exceptional remake that just missed the mark. One remake that eclipsed the original was the remake of Night of the Living Dead (NOTLD 90). This is something I have been saying since 1999; When I first found out about this remake. It only became mainstream thought when bloggers needed to fill their Halloween movie review quota. The remake to NOTLD, I always enjoyed more than the original. I never really thought significantly enough as to why. Why did I enjoy this one more than the original? Most likely because I can sympathize with every character in this version. Which I could not with the original. The music in the film is better and our leads are likable. Yes, even Mr. Cooper is more sympathetic than he is in the original and it pays off at the end of the film. 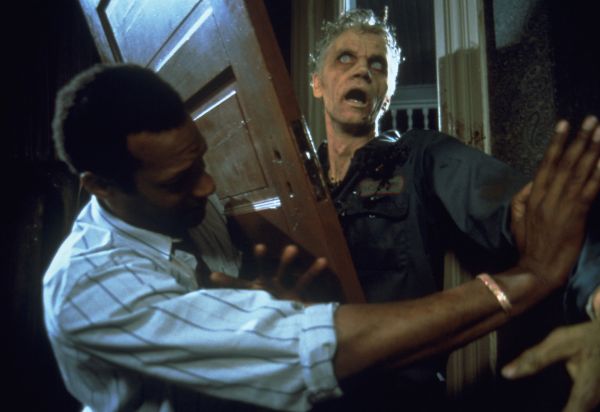 What is the film about? Well, the bodies of the recently deceased have returned to life. They are not the people we remember, they are soulless monsters that now seek the flesh of the living. Seven strangers are trapped in an isolated farmhouse struggling with the horror that awaits them on the outside and the tension that will eventually destroy them on the inside. George A. Romero re-introduces us to all our favorite characters from his original film. Like the original film, Ben (Tony Todd), is our protagonist (for the most part), and Mr. Cooper (Tom Towles), is our antagonist. As in all of Romero’s films, the zombies are not really the obstacle our characters need to overcome, it’s each other. Humanity is the true obstacle. This is evident in all of Romero’s zombie films. From NOTLD to Survival Of The Dead. The film is almost a carbon copy of the original except for one major change. Barbara (Patricia Tallman) has miraculously been transformed from an irrelevant, comatose female character into a warrior. She is the only one with any sense or grasp of the situation at hand and this time, she not going to let the men dictate her destiny. All the characters had more depth which helped us root for them and against them. 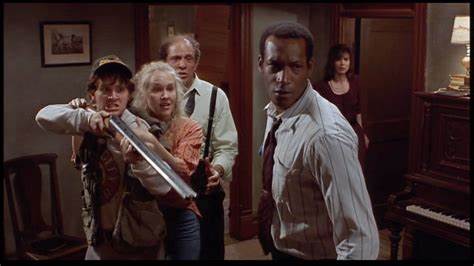 The zombies are far more superior on the remake than it was on the original. I know, given the limited budget of the original Night of the Living Dead that was probably the best that they could do. This may sound blasphemous but I wasn’t a fan of the original Night of The Living Dead. The zombie effects were outstanding in NOTLD 90. Visually, these zombies might be the best since Dawn Of The Dead. The ending of this film is just perfect. Definitely an improvement to the original (in my opinion). I never thought that the original worked. I know a lot of people that thought Ben being killed at the end was because the townspeople were racist and I didn’t see it like that. This time they changed it and made it better. It is the perfect ending. Tom Savini wasn't able to work on the original NOTLD because he was in Vietnam so when it came time to direct the re-make, Romero decided to give the honor to Savini. His accomplishment is as well-crafted as any of his mentors. Unfortunately, we weren't able to see Savini's true cinematic vision for the film (MPAA getting involved). Even though he couldn't bring his full version to life, Tom Savini did an exceptional job and maybe someday we'll be lucky enough to see his director's cut of this modern classic. If you’ve never seen it, you should try and get your paws on it. I actually have this on VHS, DvD, Blu-ray and I own a digital copy on Amazon. This is truly one of my favorite zombie films of all time and It is well worth a watch.